I often feel somewhat indignant being a metalhead, for I feel as though we are constantly judged, condemned, and even ridiculed by those outside the circle of our “metal brotherhood.” Sometimes people ask me what kind of music I like to begin a simple conversation, and when I say “metal,” they often jump to hilarious and completely prejudicial and absurd conclusions. One such incident recently resulted in someone laughing in my face and asking, “You listen to those songs about killing puppies and Satan?” Seriously. Is that really the connotation associated with metal in 2015? Really?

Clearly the man has trouble thinking outside the tiny shoebox that is his life, and there were plenty of ways to diffuse and squash the situation, but I just decided to give a half-giggle, one of my misanthropic staples to avoid extending an awkward situation, and volley back with a simple “Well, I’ve never heard one about puppies.” I guess it comes with the territory though.

These bizarre situations, which seem to occur every time I discuss music with some new stranger, got me thinking. Is the lyrical content of what I listen to really about sacrificing infantile canines to the dark lord in order to satiate some insane cultish bloodlust? Now, as an avid lover of math and psychology (and puppies), I decided I wanted to know what all these songs from my beloved style of metal music that I have grown to love were actually about in general. Only one way to find out. It’s experiment time, baby!

I created a shuffled iTunes playlist consisting of roughly 1,000 of what I would consider many of my favorite songs from all genres. These are also songs that I’ve heard countless times throughout my life. There’s black metal, death metal, blackened death metal, deathened black metal, power metal, heavy metal, heavy power metal, stoner metal, shoegaze (What is that anyway?), old time rock and roll, pop, a few hip hop tracks, music from games like Xenoblade Chronicles, and everything else in between. I tried to get a decent balance of genres for the list too, but obviously it is a little skewed toward metal just because of my own personal preference.

I kept a record of the four to five songs I heard each morning and afternoon on the way to and from work for a few days and attempted to classify each song into some sort of subjective lyrical category that I just made up. In several cases, I even had to look up the lyrics just to attempt to figure out what’s going on, and in many cases, I was stumped. Without further adieu, here is a list of what came out of the speakers inside my truck (in no particular order):

Vomitory, “Regorge in the Morgue”

Paganizer, “Bullet in the Head for the Undead”

Keep of Kalessin, “Crown of the Kings”

Nile, “Annihilation of the Wicked”

Immortal, “At the Heart of Winter”

Immortal, “Beyond the North Ways”

That is a fairly representative round of random listening, if I do say so myself. And I can’t wait to hear from fanboys about why certain songs should be in other categories either, but I digress. I’ve always been a big fan of the musical culture shock of following Marduk with the Beatles and whatnot.

The experiment revealed that the leading category of lyrical content was the one ominously dubbed Evil/Occult, which accounted for 7 of the 33 tracks in the round, or 22% of all tracks played on the iPod. The dubious Death/Violence category featured the second most-prevalent lyrical content, sporting 6 tracks or 18%. Looks like we’re on our way to a psychological disorder or becoming some type of sociopath. Guess I should just go ahead and have myself committed.

Not so fast, my friend. Those two categories account for just 40% of all tracks played, and to be honest, the context of some of the allegedly “evil” tracks amount to nothing more than a silly late night horror B-movie that nobody would complain about. The Death/Violence category was also full of surprises like the always violently terrifying Bruce Springsteen, Johnny Cash, and rapper Raekwon. I guess death and violence happens in other genres too. Weird, eh. Who would’ve thought?

So that leaves the remaining 60% of the lyrical content from my playlist belonging to, for lack of a better term, pretty harmless subject matter like astrophysics, ancient Egypt, Vikings, pumping your fist on a motorcycle, or the perils of kindergarten. Scary stuff indeed.

I think the moral of the story here is that metal has its weird, disgusting, and disturbing lyrics. Then again, what genre doesn’t? Just because my metal brethren and I bang our heads and pump our fists to something loud and aggressive does not always mean we’re out to have some giant mosh pit séance or judge and maliciously murder an innocent civilian with a big knife. Bård Eithun killed a man just like Biggie Smalls did just like Johnny Cash shot a man in Reno just to watch him die. We all have our dark and ugly sides regardless of whether it’s along with a blast beat or a 6/8 swing. Maybe my ridiculous little study here will open some eyes. Thanks for reading.

And see, not one single instance of a satanic canine sacrifice.

This is a simple round-up of the few albums/songs that have reached my playlist during the latest month.

Ages “The Malefic Miasma” (album, 2015)
This album arrived late this month, but I have waited for it even longer. I was worried that the fact that I have listened to three of the tracks since October 2013, and the title track for a couple of months, would somehow become an issue, and the other tracks wouldn’t feel connected to those first, but what an awesome birthday present this turned out to be! Sorry for the long sentence.
Just buy the album already! 10/100

Khors – “Night Falls Onto The Fronts Of Ours” (album, 2015)
And here it is! I wrote about the taster I got off the album in last month’s round-up, and the full-length has not disappointed me. Fortunately, I got some time with the album before Ages swept in and stole the show. 9.0/10

Loch Vostok – “From These Waters” (album, 2015)
I gave Loch Vostok‘s debut a score of 10/10 on another site when it was fresh, but I lost interest already on their second album. Now I felt it was time to give their new, sixth, a chance. With repeat listening I have come to like it quite a bit. 8.5/10
–

Satanic Warmaster – “Fimbulwinter” (album, 2014)
I have listened to the album over and over and I still haven’t gotten a grasp of the separate songs, but as an album “Fimbulwinter” is purely amazing. 9.5/10
–

Sulphur Aeon – “Gateway To The Antisphere” (album, 2015)
Their debut was awesome, and now I almost missed the follow up (I have stopped receiving music newsletters and such). However, the stars aligned in a way that made me stumble over the fact that “Gateway To The Antisphere” had just been released, and I just had to pick it up at once. This, their second album, is every bit as heavy as the debut, and that’s saying something. Sulphur Aeon manage to wrench out a sonic low end that you can feel in your whole body, but still keep the mix clear enough for the actual riffs to come through.
They have become one of my favorites death metal bands! 9.5/10

ALBUM: Steve’n’Seagulls – “Farm Machine”
LABEL: Spinefarm Records
YEAR: 2015
GENRE: Hillbilly Metal covers
WEBSITE: link
RATING: 7.0 / 10
–
Throughout the times there’s always been bands covering classic metal/hardrock, some doing it better than others. As for stuff such as Van Canto they can suck my balls, but Hellsongs is a better reference to a coverband that did it right.

Hayseed Dixie and Eläkeläsiet are the bands that comes to mind when listening to “Farm Machine”, with the exception that Steve’n’Seagulls has that little something extra. This is indeed a party-album and nothing more even though the musicality is truly impressive. The cover versions of Led Zeppelin‘s “Black Dog”, AC/DC’s “Thunderstruck”, Gary Moore‘s “Over the Hills and Far Away”, Dio‘s “Holy Diver” and Pantera‘s “Cemetary Gates”, just to name a few,  are simply put pure brilliance. Although Rammstein‘s “Ich Will” is not really doing it at all for me even though I like the original song.
–
So, chill your beers and throw a steak on the barbie, since Steve’n’Seagulls is your party-soundtrack for the summer of 2015! 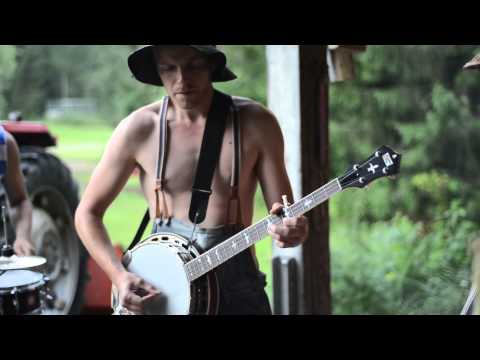